IN SUPPORT OF ‘SENSEI’ EP OUT NEXT MONTH ON FIREPOWER RECORDS 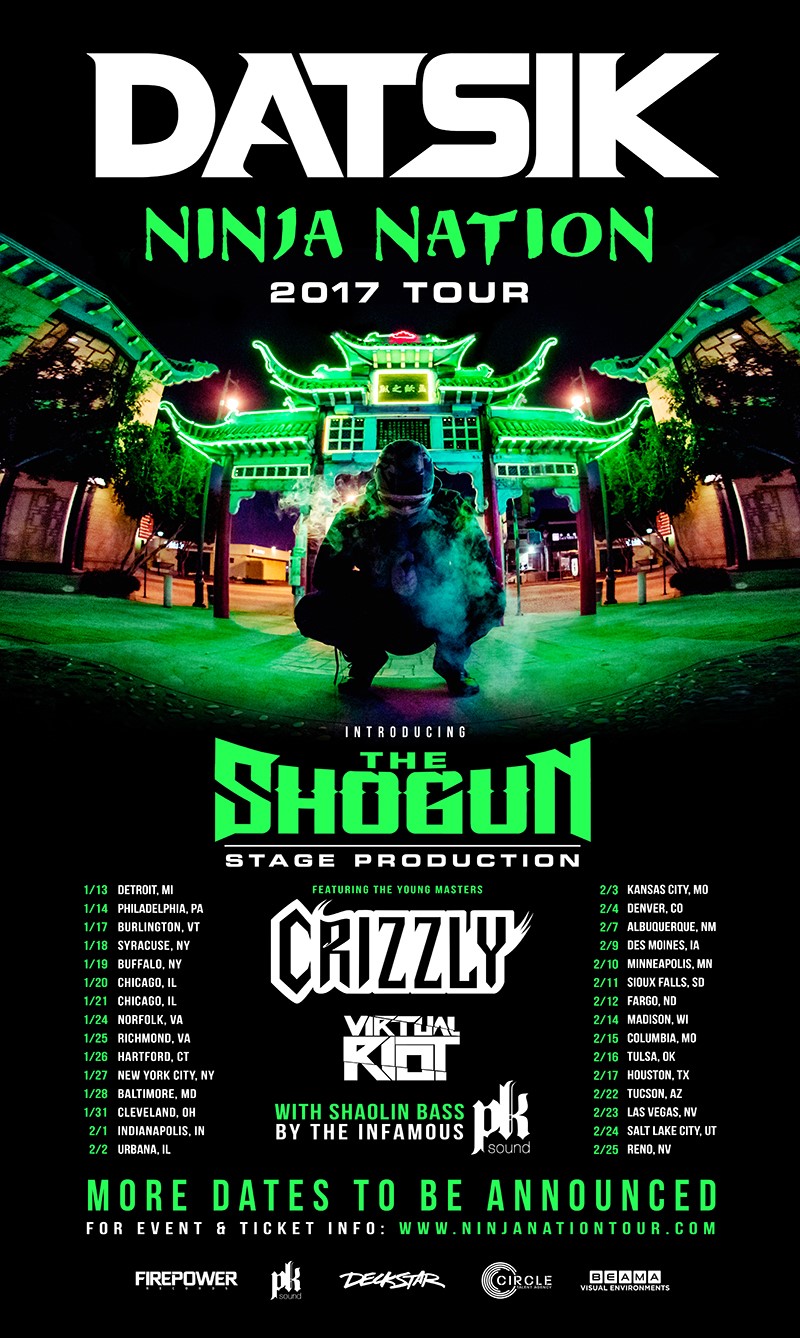 Armed with shaolin bass from the infamous PK-Sound, new bass hip-hop producer DATSIK announces today (November 18) his return to the road with the ‘Ninja Nation 2017 Tour,’ in support of his new EP Sensei out next month on Firepower Records.  Kicking off Friday, January 13 at the Royal Oak Theatre, the North American tour continues east featuring two consecutive plays at Chicago’s Concord Music Hall and a performance at New York’s Playstation Theatre before moving west and wrapping at Reno’s Cargo Concert Hall.  Joining DATSIK will be Crizzly and Virtual Riot with special guests to be added to select dates.  Full tour itinerary is below with more dates to be added soon.

Themed after his obsession with ninja culture previously marked by his 2015 ‘Ninja Nation Tour,’ DATSIK brings with him a new high-tech production to the 2017 edition called “The Shogun.” “The Shogun stage is the next chapter and is an amalgamation of my wildest vision to date,” says DATSIK.  “After touring with the Vortex, I’ve wanted to create something unique that will stand out from the rest, and embody what it is to be a rave ninja. We’ve got a ton of dope surprises waiting for u with this one, so get ready to have some fun! Can’t wait to see you guys on the Ninja Nation 2017 tour!” he adds.

In conjunction with the touring news, DATSIK has made available for streaming today (November 18) first single “Just Sayain,” a bass-fueled single sure to infiltrate the dance floor.  Stream the track here: smarturl.it/JustSaiyanDatsik.  Look for DATSIK to perform “Just Sayain” and other tracks off his new Sensei EP (out next month via Firepower Records) on tour.

For more event details, updates on tour dates, and to purchase tickets to the ‘Ninja Nation 2017 Tour,’ click here: WWW.NINJANATIONTOUR.COM