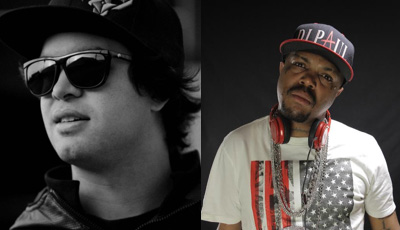 DATSIK— the North American producer and purveyor of new bass hip-hop–is currently in the midst of his North American Ninja Nation Tour in support of his new EP DOWN 4 MY NINJAS out now via his own imprint Firepower Records. Joining him for the California stops next week in San Diego, Los Angeles, Riverside and San Francisco will be special guest DJ Paul of Three Six Mafia.

“I can’t wait for these upcoming shows with DJ PAUL K.O.M,” says DATSIK.  “That’s my dude! I’m super jacked to have such a special guest to be rolling deep with the Firepower crew! SQUAD!!!”

Themed after his obsession with ninjas and all things martial arts, the Ninja Nation Tour is a call to arms for his fans across the continent—whom he calls his Ninja Squad–to experience DATSIK’s homage to hip-hop influence on American dubstep.  He’ll highlight material from his new Down 4 My Ninjas EP plus other cool cuts from his Firepower arsenal. He brings along the VORTEX 3.0–the third issue of his psychedelic stage set–which is getting special upgrades tied in with the ninja theme. The new EP boasts collaborations with hip-hop legends KRS-One and DJ Paul from the GRAMMY-Nominated rap collective Three 6 Mafia. DATSIK gives the classic genre new energy to burn with his signature bass forward approach…a formula for future hip-hop. From Mayor Apeshit’s filthy lyrical swordplay in “Katana” to DJ Paul’s Dirty South “Zero F**ks” attitude in “Get Smashed,” the tracks could have possibly been featured in the rap sections in record stores of the past.

LISTEN TO THE EP HERE

Check out the LA WEEKLY’s coverage of DATSIK and the VORTEX 3.0 here:    http://www.laweekly.com/music/datsik-prepares-the-vortex-for-what-might-be-its-final-tour-5335979